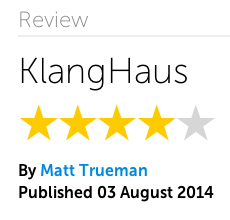 The cage doors are open. The animals have gone. Escaped? Or eliminated? These rooms are tiled and lab-like. There are plugholes in the floor. Somewhere, down the corridor, there’s a musical growl: the low snarl of an electric guitar. Then, out of a metallic cell, steps a man with a bass drum.

KlangHaus is an art-rock gig in a disused animal hospital. That sounds so benevolent. In your head, terrible things have happened here. You see rabbits pinned down and petrified, horses rearing up. And, with electro four-piece The Neutrinos cooking up this menacing soundscape—encroaching bass riffs, ghostly guitars and Karen Reilly’s squawking vocals—the laboratory comes alive. The whole thing feels like an exorcism, channelling the spirits of beasts, all of them mutilated in the name of science.

This is theatre made of nothing more than sound and space. It’s a gig that places you two feet from the band, closer even, and that’s exciting enough in itself. As is the space itself: a network of corridors and observation points with no natural light and a faintly medicinal smell.

Walk past a doorway and you’re blasted by noise: a furious drum solo that seems like so many screams. Sometimes KlangHaus goes quiet, hauntingly so. Reilly drags a chain over the concrete floor. Two voices harmonize into a cutesy music-box refrain: “And the song sings on / When the butcher’s gone.” A saw emits this tiny, high-pitched howl. This is evocative, eerie stuff, certain to burrow into your bone marrow.